As I said before, the main issue at hand during yesterdayâ€™s hearing centered on compliance with existing federal and state occupational safety and health standards. Cal-OSHA technically already mandates the use of condoms and other types of barrier protection in adult film production, however very few companies and other purveyors of adult film content actually use any barrier protection at all.

There are several reasons for this including industry-wide faith in the internally regulated, once-a-month HIV/STI testing system currently in place via Adult Industry Medical (AIM), the lack of consumer demand for products with condoms, the occupational infeasibility of condom use in penetrative sex (whereas â€œciviliansâ€ have sex for 5-7 minutes at a time, adult film talent do it for more like 50-70… during which time condoms break, erections disappear, and people get chaffed), and the perceived extraneousness of technically legally mandated barrier protection in depictions outside penetrative sex (ie oral sex, sex toy use, pop shots on unbroken skin, & kissing).

Regardless, the law reads as it reads; and the AIDS Healthcare Foundation is pushing Cal-OSHA to address the vast majority of companiesâ€™ non-compliance. The industry trade organization Free Speech Coalition (FSC), however, is pushing back with demands for the development of options that both protect talent health and the viability of the industry.

Although yesterdayâ€™s hearing was largely inconclusive, these are three of the proposed options that were tossed around (assuming that mandatory barrier protection on par with existing law is impossible and including input from all sides):

1. More frequent STI testing â€“ rather than the once-a-month system that is already in place, testing talent for HIV and other STIs every two weeks was suggested.

The main issue surrounding this is cost. Currently, talent pay for their own HIV/STI testing (a system not unlike the Nevada system wherein legal brothel prostitutes are required by law to pay for their own STI testing and licensing); test results must come from AIM. More frequent testing would both increase costs incurred by talent and put additional strain on the already rather strained care provider (AIM).

During this conversation, it was suggested that talent be permitted to go to any doctor or testing facility they choose. This is an extremely problematic suggestion in my view as it will decentralize testing and monitoring, making potential forgery and results falsification all the easier (remember Marc Wallice, the man who tampered with his test results and caused the HIV cluster in 1998).

A suggestion I did find interesting surrounding these issues was for a testing fund of sorts, a pool wherein companies would pay in to help defray some of the cost of more frequent testing. Although the logistics of this seem down right insurmountable (who pays for what, and how often? If you hire talent once a month are you as responsible as someone who hires that same person 3 times a month?), it is an interesting idea. And although it certainly needs some refining, I found the suggestion of more frequent STI testing to be the most feasible of these three options.

Each of these “fakes” is unreasonable. â€œSimulatedâ€ sex is already essentially done in softer core shots wherein no penetration and/or no erect penis are visible. The markets for soft/er core content are distinctly different from the XXX/hard core market. Such a suggestion really means: try to sell soft core content to the hard core market… riiight.

And finally, digitally removing condoms during post-production is said to be cost prohibitive. Such technical labor would increase production costs up to four times according to Joy King from Wicked Pictures. Quadrulple the costs? How is a small business supposed to cover that?

As I said before, this is a complicated issue that is not likely to be resolved soon. I left LA yesterday encouraged by Cal-OSHAâ€™s willingness to listen to industry insiders, but I was also rather apprehensive. There are many bigger issues at play here in addition to the Cal-OSHA mandates including free speech & freedom of expression and a clear struggle between two camps with polarized ideas about morality and the workplace. There is another hearing in October and the probable development of sub-advisory committees in the meantimeâ€¦ I will definitely keep you posted.

What do you think? Email Deborah Gold (Cal-OSHA Standards Board)… or you can always email me!! 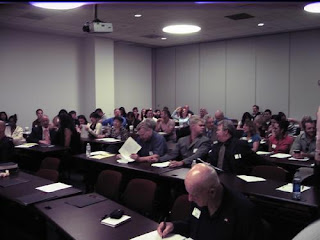 Can you spot me in this pic?! Hint: I’m almost exactly in the middle :) (photo by Tod Hunter)