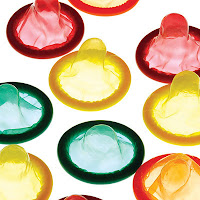 Oh condom use in adult films, what a complicated and tricky issue you areâ€¦

Now, as a person who reached sexual maturity (whatever that means) in the 1990s, I know that condom use is the most effective way to protect oneself from bloodbourne STIs. However, as an eminent pornologist, I also know that state-mandated condom use in adult films is a very bad idea. Ummâ€¦what?! you may ask. Let me explain.

As early as 1993, industry insiders and producers began working to protect talent from STI and HIV infection; and condoms began to appear in major productions during the mid-1990s. Then, in 1998, after a long-time talent Marc Wallice falsified an HIV test, performed condomless in several scenes, and infected at least three women he worked with, industry leaders took steps to formalize protection of both the business and its talent.

First, the Free Speech Coalition (FSC) initiated establishment of the non-profit health care organization Adult Industry Medical (AIM). The way it works today is like this: AIM maintains a database that allows producers to confirm that talent are HIV/STI free. In order to make sure statuses are up to date and accurate, talent must get tested by AIM every 28 days (only tests from AIM are acceptable). Put simply, talent cannot â€“and do notâ€” work in the adult film industry without documentation of negative HIV/STI status from AIM.

And just because itâ€™s so aggravating, a quick note about â€œPatient Zero.â€ A media firestorm erupted on June 12, 2009 when the LA Times reported that 16 (16!!) unpublicized/unreported HIV positive talent were working in the adult film industry. Now, this would understandably be cause for freak out if it had been true, which of course it was not. In fact, the LA Times retracted the story on June 17, 2009, stating the LA County Department of Healthâ€™s inaccurate analysis and reporting were responsible for their subsequent inaccurate analysis and reporting.

This is what really happened: only one woman â€“â€œPatient Zeroâ€â€“ tested positive, and she and those she worked with were promptly quarantined (I imagine this is where the amount 16 came from). Thus, due to AIMâ€™s regular and rigorous testing mandates, no additional talent were infected. But do you ever read about that? Of course not. In fact, people still report on this set of circumstances as a 16-case outbreak in spite of the fact that the LA Times retracted the story almost immediately!! Argh!!

Now back to condom useâ€¦ The second thing that happened after Marc Wallice in 1998 was this: six major adult film production companies immediately and voluntarily instituted a â€œcondom-onlyâ€ policy for sex scenes in their films. This self-imposed condom only mandate quickly became a complex issue though. On one hand, the health and safety of talent are major concerns, and condom use in all instances of penetrative sex is generally safer practice than occasional or none. But, on the other hand, the business of adult film production is negatively affected by condom use.

Ask yourself this â€“ do you fantasize about that raw lusty unabashed Wild Orchid-type sex, or do you think about snappy opaque latex? (donâ€™t lie!!) It has been reported that sales decline when condoms are in place, presumably because they shatter the fantasy that the vast majority of consumers are looking for.

Think Iâ€™m kidding? Well, when the Darren James/HIV situation occurred in 2004, only two of the original six â€œcondom-onlyâ€ production companies, Vivid and Wicked, had been able to retain the policy and keep their doors open. Vivid eventually went â€œcondom-optionalâ€ (wherein talent are able to opt for condom or no) in 2006, leaving Wicked Pictures the sole remaining condom-only company around today.

So, this is what we have so far: an industry is aware of the potential health risks some of its employees face, so they take steps to devise a system that protects both the health of talent and the viability of the business. Their system is so effective that the HIV incidence rate in a population that depends on â€œriskyâ€ sex behavior (read: frequent sex with multiple partners) is significantly lower than it is in the general population. Yet for some reason Cal-OSHA feels that mandatory condom use is necessaryâ€¦ huh?

Are you as confused as me? Have something to add? Email me!

Tune in tomorrow for whatâ€™s up next â€“ how mandatory condom use will entrap an industry into breaking all sorts of laws!

Oh and donâ€™t just take my word for it – have some cites ;)